How does Inert Gas Ionization Instruments work on the body?

In 2007, Therapeutic BioSystems, LLC™ manufacturer of the Lymph Drainage XP™ family of instruments contracted Sky-David (who has been involved in the technology for over 30 years, a biologist, and PhD in Physical Therapy) to develop a newer and more advanced version of the existing technology that was currently being offered through other manufacturers and engineers.
As part of the criteria, and based on Sky’s ongoing research in this photobiology field, they focused on the use of Xenon, Argon and Krypton for the inert gases used in the transmission head and tested several pressure variations within the glass bulb for maximum delivery and biological compatibility.
For a great reference on the discussion of Xenon and Krypton in human tissue you can read the book, Einstein Doesn't Work Here Anymore by Maurice B. Cooke. Although controversial, (as the case with most things these days) in this book there is a lot of research regarding the biological compatibility of Xenon with human tissue and Krypton as a catalyst.
To further enhance the transmission effect and as a precaution, Therapeutic BioSystems, LLC specified the glass bulb that contains the gasses to be manufactured from unleaded glass making certain no heavy metals could be transmitted during the ionization process. Additionally, they used a poly carbonate case for the transmission head and no glue or adhesive to insure toxins are not leached out during therapy due to the ozone produced during ionization.
The most significant change was in proprietary circuitry scheme of the Lymph Drainage XP™ family of instruments which utilize a randomized complex signal envelope with emphasis on the attack and delivery of the signal transmitted to the transmission head. With the more prominent attack wave the vibration produced can be compared to a jack hammer busting up concrete (fibrotic and trapped proteins) with the added flexibility of tuning down the attack for a more subtle sweep (superficial). This complex circuitry scheme is responsible for the overall effectiveness of the ability to move stagnate or fibrotic lymph in the lymph system without overstressing the lymph vessels. Lymph vessels can be differentiated between lymph capillaries, pre collectors, lymph collectors, and lymphatic trunks.
How does Inert Gas Ionization Instruments work on the body? Inert elements have the same amount of protons and electrons so they cannot interact molecularly with any other element thus they remain in their elemental state and do not form molecules. This is what gives them their unique properties (inert). The Inert Gas Ionization Instruments (IGII) high voltage discharge excites the electrons causing these electrons to jump into an outer orbit. When this occurs the atom has to go back to stability or back to its natural state. This return to stability is given off as radiant energy through the transmission head which would be technically called a transducer (transducers change or transform energy).
This radiant energy is given off through a combination of light, sound vibrations and through the flow of electrons (also known as ionization) which is discharged into the nearest ground (living body tissue). This effect is far more biologically compatible through the transduction of the Inert Gas Ionization process than say having broadcast at low voltages into metal plates, such as an ultra sound.
The reason for this is that inert elements create a buffering effect in the exchange of energy in the ionization of the inert gases rather than the direct RF transmission created by the actual circuitry of the instrument.
The effect created by the light & sound vibration and flow of electrons as they are ionized through the transmission head cause a disassociation of the trapped proteins within the interstitium. Trapped proteins in the interstitium hold water and cause swelling and blockage as the thread like vessels swell beyond their capacity, and can no longer effectively pass along the lymph through its normal means of transport in the lymphatic system.
Trapped proteins (not to be confused with nutrient proteins) are highly electrical in nature and when they are exposed to the discharging ions in the transmission head they become disassociation and release their bond between themselves then releasing the stagnate lymph.
This allows the lymph vessels to release the excess blocked, stagnate or retained fluid and to flow out into its normal filtration and reabsorption channels.
As we can see the use of a Inert Gas Ionization Instrument in conjunction with the proper therapeutic techniques can provide results far beyond that of manual lymph manipulation or use of tight fitting garments by addressing the trapped and sticky proteins directly. 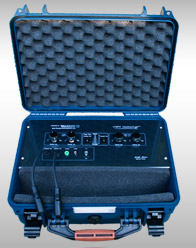 This treatment is not for pregnant women, those with electronically implanted devices, or those with deep vein thrombosis.

Do NOT follow this link or you will be banned from the site!